Gerald Wolfe is a pianist, songwriter, and lead singer. He began his career with the Dumplin Valley Boys. In 1986 George Younce and Glen Payne hired Wolfe as pianist for the Cathedral Quartet when Roger Bennett left the group for two years. While with the Cathedrals, Wolfe sang the lead vocal part on the hit song "Champion Of Love" (Symphony Of Praise).

In 1988, Wolfe left the Cathedrals to pursue a solo career. In 1990 he founded the group Greater Vision, along with former Cathedral baritone Mark Trammell and tenor Chris Allman. He remains with the group today.

Wolfe serves on the Board Of Directors at the National Quartet Convention. He also heads a concert tour branded as Gerald Wolfe's Gospel Music Hymn Sing. He has hosted several radio and television events over the years as well.

hi-res
1988 Gerald Wolfe (Benson Records/R2453): Once Upon A Cross; His Excellent Greatness; I’m Persuaded To Believe; It Is Finished; All I Want Is You; Jesus, We’re Depending On You; Jesus Paid It All; Made For Praise; I Am Thine O Lord; Till The Storm Passes By. 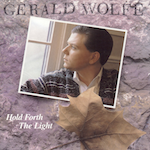 1990 Instrumental Favorites: Sweet, Sweet Spirit; I’ve Got That Old Time Religion; I’d Rather Have Jesus; Soon And Very Soon; Since He Put A Little Sunshine In; Blessed Assurance; Just Over In The Gloryland; There Is A Fountain; Leaning On The Everlasting Arms; What A Friend We Have In Jesus.

1995 I Will Praise Him: Precious Lord Take My Hand; Turn Your Eyes Upon Jesus; He Hideth My Soul; Center Of My Joy; Oh How He Loves You And Me; I Won’t Have To Cross Jordan Alone; Heaven Came Down; Keep On The Firing Line; Since Jesus Came Into My Heart; While Endless Ages Roll; Power In The Blood. 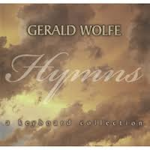 1999 Hymns: Near To The Heart Of God; Jesus Paid It All; Whispering Hope; Where He Leads Me; Grace Greater Than Our Sin; I Surrender All; The Love Of God; Blessed Assurance; Have Thine Own Way Lord; Softly And Tenderly.

2001 My Kind Of Christmas (Greater Vision Music Ministries/GVCD-2102) (Reissued in 2002 as Daywind Records/DAY1305): Carol Medley; The Birthday Of A King; O Holy Night; We Three Kings; Away In A Manger; Joy To The World; Silent Night; The First Noel; Go Tell It On The Mountain; There's Something About That Name.

2006 Keys To Quiet Places (Greater Vision Music Ministries): When They Ring Those Golden Bells; There Is A Fountain; Abide With Me; God Leads His Children; I Love To Tell The Story; The Old Rugged Cross; There's Room At The Cross; The Haven Of Rest; Sweet, Sweet Spirit; Take My Hand, Precious Lord; This Is My Father's World; Near The Cross. 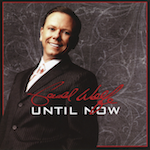 hi-res
2008 Until Now (Greater Vision Music Ministries/GVCD-20084): I Still Cling To The Old Rugged Cross; The Land Of Living; Cherish That Name; The Eyes Of Jesus; Champion Of Love; Just One More Soul; No Wonder; There Is A River; O Holy Night; You'll Carry Me Through; The Spirit Of Brokenness; Til The Storm Passes By.

hi-res
2011 Hymns You Asked For (Greater Vision Music Ministries/GVCD-20113): The Love Of God; How Great Thou Art; What A Friend We Have In Jesus; Jesus Is The Sweetest Name I Know; Jesus Paid It All; When I Survey The Wonderous Cross; The Old Rugged Cross; Wonderful Grace Of Jesus; Amazing Grace; Come Thou Fount Of Every Blessing; Fairest Lord Jesus; His Eye Is On The Sparrow; Does Jesus Care; Great Is Thy Faithfulness; Burdens Are Lifted At Calvary; It Is Well With My Soul; Whispering Hope; In The Garden; God Will Take Care Of You; Just As I Am; Trust And Obey.

I Know I'm Saved
Sowing The Seed
Trusting In The Lord

All articles are the property of SGHistory.com and should not be copied, stored or reproduced by any means without the express written permission of the editors of SGHistory.com.
Wikipedia contributors, this particularly includes you. Please do not copy our work and present it as your own.