John Hall sang bass for the Inspirationals in the late 1950s and for the Stamps Quartet in the early 1960s. This was after the group had been purchased by JD Sumner and James Blackwood from Frank Stamps while Sumner was still touring with the Blackwood Brothers. In 1965, Sumner and Hall swapped places. Sumner began traveling with the Stamps and Hall went to the Blackwood Brothers where he remained until 1968.

After leaving the Blackwood Brothers, Hall launched a solo career. He appeared on many of the Gaither Homecoming videos during the 1990s. 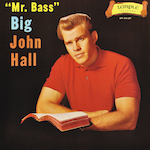 hi-res
1964 "Mr. Bass" Big John Hall (Temple Records/LPT-313): Go Tell It On The Mountain; When He Reached Down His Hand; His Grace Reaches Me; The Old Time Religion; Were You There; Give Me A Man That Can Cry; Wait For Me; Roll Jordan Roll; I Shall Be At Home With Jesus; Undying Love; At The End Of My Journey; I Serve A Living God. 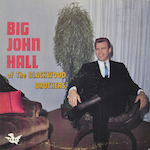 hi-res
1967 Big John Hall Of The Blackwood Brothers (Peace Records/70813): I'm Not Worthy; This Great Love Of Jesus; Until You've Known The Love Of God; Born To Love The Lord; Beyond The Gates; Will You Meet Me Over Yonder; His Grace Is Sufficient; How Great Thou Art; He Washed My Eyes With Tears; I'll Go Where He Wants Me To Go; What A Precious Friend Is He; For All My Sin. 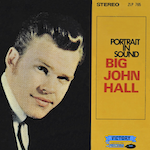 hi-res
1969 Portrait In Sound (Zondervan Records/ZLP-765): Surely Goodness And Mercy; Working Man's Prayer; There Is No Greater Love; The Choice Is Mine; At Calvary; Yield Not To Temptation; God Did A Wonderful Thing; How Rich I Am; I Know Who Holds Tomorrow; He Knows What He's Doin' All The Time.

1970 If God Is Dead (Zondervan Records/ZLP-808): If God Is Dead; Follow Me; Something Worth Living For; It's In Your Hands; Had It Not Been; Reach Out To Jesus; Thank God I Am Free; He Touched Me; The Old Rugged Cross Made The Difference; Whisper His Name To Me. 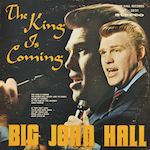 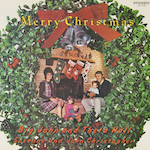 hi-res
1971 Merry Christmas (John Hall Records/LST-1225): Do You Hear What I Hear; Oh, Little Town Of Bethlehem; Silent Night; We Three Kings; White Christmas; O, Holy Night; C-H-R-I-S-T-M-A-S; It Came Upon A Midnight Clear; Away In A Manger; We Wish You A Merry Christmas. 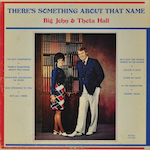 1973 I Don't Know Why (John Hall Records/LST-3033): One Touch; Oh I Need Him; I Don't Know Why; Because He Lives; Through It All; Praise God For His Wonderful Love; The Lighthouse; There Is A River; It Shall Flow Like A River; Allelujah.

hi-res
1974 Live At Melodyland (John Hall Records/LST-3134): Amazing Grace; Get All Excited; Bless The Lord; The Blood; He Is Lord/Oh Come Let Us Adore Him/For He Alone Is Worthy; Standing In The Liberty; Let's Just Praise The Lord; His Banner Over Me Is Love; God's World. 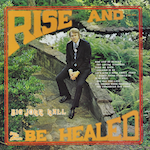 hi-res
1975 Rise And Be Healed (John Hall Records/LST-3235): Rise And Be Healed; Thy Loving Kindness; Take Me Back; Let's Sing About Jesus; It Is Well; One Day Too Late; All Things Work Together; Greater Is He That Is In Me; I Didn't Think It Could Be; The Comforter Has Come. 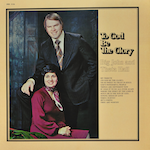 hi-res
1976 To God Be The Glory (John Hall Records/H-3336): My Tribute (To God Be The Glory); Tis So Sweet To Trust In Jesus; God's Wonderful People; Medley: Things Are Different Now/If I Had It To Do All Over Again?; Where The Spirit Of The Lord Is; Jesus (He Is The Son Of God); Sowing Seeds Of Love; When I Survey; He's Coming; Thou Art Worthy (Big John and Theta Hall). 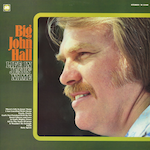 hi-res
1976 Life In Jesus' Name (John Hall Records/H-3340): There's Life In Jesus' Name; I Am Crucified With Christ; Freely, Freely; God's Not Finished With Me Yet; Sweet Liberty And Love; In God's Mighty Peace; All In The Name Of Jesus; It Wouldn't Be Enough; Faith; Holy Spirit.

1977 I Am Loved (John Hall Records/H-3346): I Am Loved; At The Name Of Jesus; The World Didn't Give It To Me; Surely The Presence; He's Here Right Now; What A Difference You've Made; He's Got It All In Control; Peace In The Midst Of The Storm; In Everything Give Thanks; It's My Desire.

1978 Celebration Of Praise (John Hall Records): It Doesn't Matter Where You Come From; We Are Family; Look To Jesus; While Jesus Is Passing By/Rise And Be Healed/It's Done; I Just Came To Praise The Lord/He Is Exalted/Before The Rocks Cry Out; Worthy; It Is Finished; The Lord's Prayer.

1982 The Reason I Praise (John Hall Records): The Reason I Praise; I Will Enter His Gates/Bless The Lord/We Worship And Adore Thee; Come Lord Jesus; Behold The Lamb; Put On The Armor Of God; Precious Blood; The Victory Song; David's Psalm; Instrument Of Worship.

1982 The Lord Liveth (John Hall Records): The Lord Liveth; Anchored In The Rock Of Ages; Majesty; Fear Not; Be Glorified; A New Creation; Buried Alive; Lord You Do All Things Well; Think Of These Things; Abba Father.

1984 The Power And Glory (John Hall Records): All Hail To The King; Jesus Destroyed The Works Of The Devil; I Am; Blow The Trumpet; Our God Reigns; All Hail The Power/I Sing The Mighty Power/Crown Him With Many Crowns; Name Above All Names; Oh The Glory Of His Presence; See His Glory/Glorify Thy Name.

???? To God Be The Glory (Praise Records): My Tribute; Tis So Sweet To Trust In Jesus; God's Wonderful People; Things Are Different Now/If I Had To Do It All Over Again; Where The Spirit Of The Lord Is; Jesus He Is The Son Of God; Sowing Seeds Of Love; When I Survey The Wonderous Cross; He's Coming; Thou Art Worthy (Big John and Theta Hall).
All articles are the property of SGHistory.com and should not be copied, stored or reproduced by any means without the express written permission of the editors of SGHistory.com.
Wikipedia contributors, this particularly includes you. Please do not copy our work and present it as your own.