Ray Dean Reese was born on May 16,1939 near Asheville, North Carolina. After graduating from High School in 1957, he did two hitches in the U.S. Army. After returning from the Army in 1963, he joined the newly reorganized quartet the Silvertones for about 3 years. After singing in about 3 groups (including The Inspirations) for a short time he joined The Kingsmen Quartet in 1967. Ray sang with the Kingsmen for about a year then left when Calvin Runion returned to the quartet after leaving the Dixie Echoes. He also sang bass for the Pine Ridge Boys and the Journeymen And Kathleen. By early 1971 he was back singing with the Kingsmen and has been a permanent fixture ever since. He is currently the Kingsmen bass singer and manager. 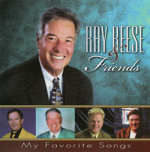 hi-res back cover
2002 Ray Reese And Friends (Song Garden Records/SG-9930): I Came On Business For The King; Life's Railway To Heaven; If I Could Hear My Mother Pray Again; How Great Thou Art; Walking The Sea; The Eastern Gate; Healing Stream; I Am A Pilgrim; The Old Ship Of Zion; There'll Be No Peace Till Jesus Comes Again. (reissued in 2005 on the Kingsmen Music Group label as A Lifetime Of Music.)

All articles are the property of SGHistory.com and should not be copied, stored or reproduced by any means without the express written permission of the editors of SGHistory.com.
Wikipedia contributors, this particularly includes you. Please do not copy our work and present it as your own.